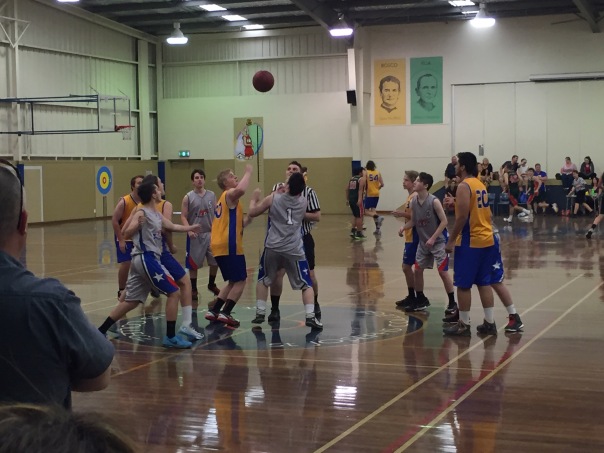 Basketball started up again yesterday – my baby has moved into the under 18’s – wow is that different!! For starters some of the boys that my son is competing against look like men!! One boy had a full beard – what the?
Happily our boys played really well and held their own. What’s even better is that we have a coach for this season! Yay!!

It’s going to be weird playing on a Sunday night instead of the usual Saturday afternoons – but I have a good feeling about this season.

Remind me not to put my hand up for anything again – I know I won’t listen – I never do, you see I just can’t help myself.
I volunteered to coordinate the summer soccer program for our kids again this year – we were changing clubs and we were looking forward to a new and exciting summer season.
Turns out though that we have registered for the wrong district.  Instead of playing 5 mins from home as we were all expecting we are now playing somewhere in the middle of whoop whoop which is hours away!!
I have been emailing the Football Federation Victoria in hope we can rectify the problem but it doesn’t look promising at all. I can see myself making the long trek out to Thornbury, on my own, car full of 13 year old boys. Help!!

I had such a great night at the basketball break up tonight!! All the boys are just lovely and I have really loved spending time with them all.

Because the club will only provide two trophies for the coaches to give out and because I felt that every boy on my team deserved one, I came up with the idea of buying some cheap little trophies to give the boys long with chocolate – let’s face it who doesn’t like chocolate? The boys seemed to like my idea of the little trophy and chocolates so that was good.

The zorb soccer which is what we chose to do as our break up was lots of fun, except our boys were more interested in knocking each other over than actually playing soccer. 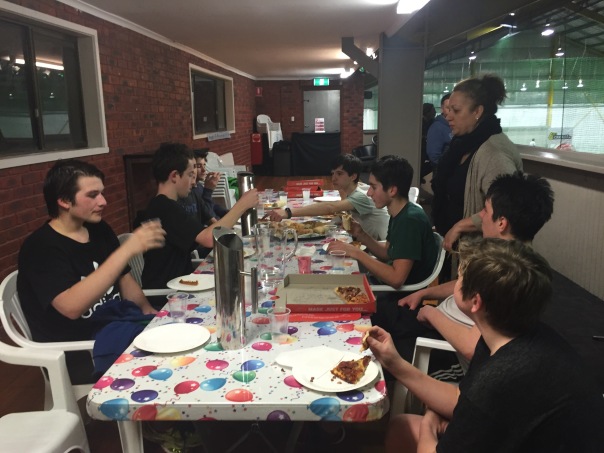 They had 45 mins in those zorb balls and were so hot and thirsty afterwards that they were guzzling water like it was going out of fashion, then they played a couple of games of dodge ball and finally some normal soccer then it was upstairs for something to eat followed by speeches and presents.

I was very spoilt, the team got me a thirty dollar Churros voucher (for that new Churro shop) and an $80 spa voucher. The boys all signed a card with lovely messages. It has been a great season and a wonderful and positive experience. One I will cherish always.

Well I did it!! I managed to get through a whole season as basketball coach!! My job is not quite finished our final game is on Saturday, but tonight was the final training session, and we had a fun filled hour and a half!!
Looking back I have to say that the season did not come without its share of challenges, but the positives have out weighed any negatives by far!!

I know that I will look back on my time as coach fondly and will treasure the memories that I have shared with my son and his friends.
There is a certain amount of pride and sense of self accomplishment that I can’t help feeling, that I’m sure will stay with me for a long while.

First Aussie Rules football game for the year and our team had a great win!!  When it comes to spectator sports  AFL is the best! It’s fast paced, filled with action and intensity!!

Tough day at the office this weekend at basketball!! The one thing the team had going for them, the one thing that gave them an edge above the competition is that they were a close knit team, kind of one for all and all for one. But in the last few weeks something has tipped the scales and the dynamics are all out. At this weeks game there was a massive blue between two of the boys, they almost came to blows!! How can we win any games when the team is bickering like this? Instead of focusing on each other’s weaknesses they should be appreciating each other’s strengths the unique qualities that each person brings to the team.

So on Tuesday I have arranged for the boys to do a team bonding session at the boxing gym that I attend and love! I’m hoping that some time together to just have fun and work off some of those frustrations and some of that testosterone overload will helpfully help to mend the rift and gets us back on track.

I attended a skills drills and special plays workshop today with Trevor Gleeson who is the coach of the Perth Wildcats and I have to say that it was really great.
He has so much passion and knowledge, the session was fun and informative and very entertaining.
My only wish was that my son had attended the workshop with me he would have found it to be so beneficial and he would have loved it.
Some of the drills and plays would be a bit advance for the majority of the boys on my team but not for all of them and certainly not for George.

Tomorrow at training I will try and introduce some of the things that I picked up tonight, hopefully it will help us going forward in the season.

Grading games are now over and the season is set to commence. What our boys have above the rest of the competition is that they are all great mates, and when they play they play for each other. So they may not be the best team in their division or the most skilful, they certainly don’t have the best coach, but they have a bond which gives them an edge above the competition and sometimes that’s all it takes.
Go Bulls !!!

So today we had our first loss in basketball and I have to admit it was disappointing! Even though we are still playing grading games, we still want to win.

The team we were up against today has beaten all the other teams they have come up against by an average of 50 points so we were expecting a tough game and I guess a loss.
The first half though our boys were awesome!! Half time scores were tied, our boys were on fire the opposition did not know what was happening, but then one of our players got injured – that’s the third player in three weeks to get hurt – and we were all out of subs.
The second half of the game, the opposition came out firing and got a few quick shots, our boys seemed to panic which lead to mistakes, which lead to the opposition getting ahead by quite a few shots. To the boys credit they didn’t give up and the final score was 23 to 42.
After the game the opposition coach came over and was just lovely – he could obviously see I was new to this coaching gig and offered some helpful advice which I am very grateful for.
So three weeks into the season, still grading games the tally is  two wins and one loss and three injuries.

This was on Pintrest yesterday. What an awesome way to honour a friend! 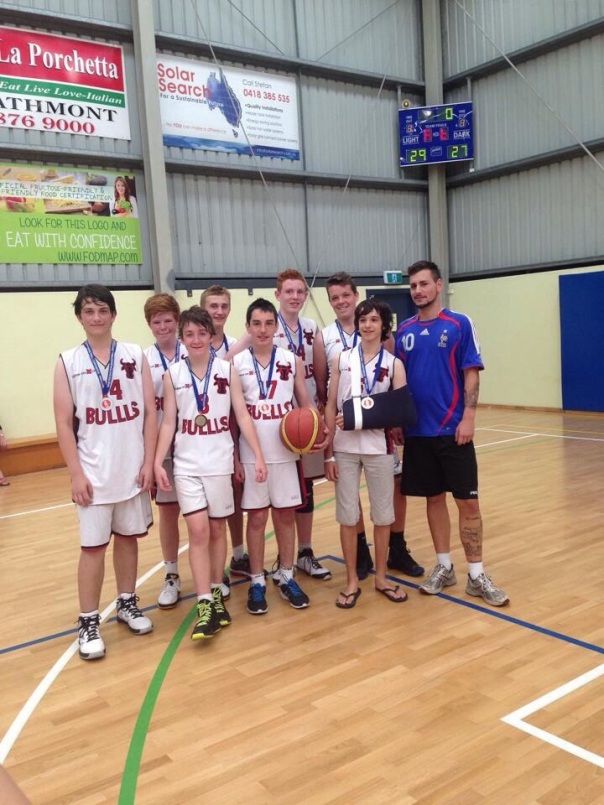 Today my eldest had his basketball Grandfinal!! Wow what a game!! A real nail biter!!

With 8 seconds to go our boys had finally managed to get ahead by 2 points, but then the other team got the ball and for a split second it looked like it might all end as a draw.

Luckily our boys were able to get the rebound and win the Grand Final.

It was a very emotionally charged day. I was so proud of all the boys but especially proud of my son who played an awesome game and was clearly the man of the match.

The coach, who by the way happens to be my nephew, was awesome!! He has managed to lead the team to victory with his perseverance and dedication.

Many of the boys had never played basketball before joining our team but thanks to the coaches efforts they were all able to step up and get to where they are today.

This day will stay with them forever as it will with me too.

I love watching my kids play sport. I enjoy it so much more than watching the professionals play and to get to see both my boys (son and nephew that I love as my own) was a double bonus. Well done Bulls 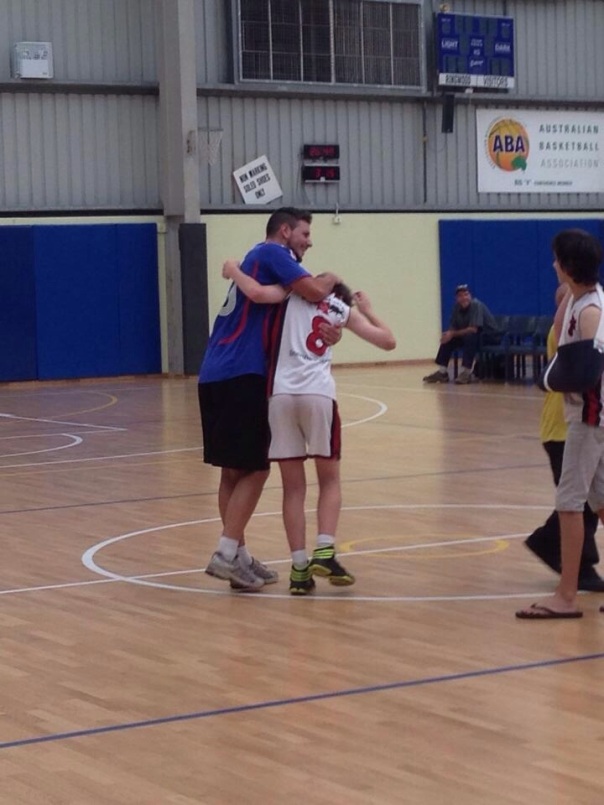